Southeast University is one of the oldest institutions of higher learning in China. Its origins can be traced back to 1902, when it was founded as Sanjiang Normal College. Then, it evolved as: Nanjing Higher Normal School, National Southeast University and National Central University. During the nationwide restructuring of institutions of higher learning in 1952, Nanjing Institute of Technology was established on the original site of National Central University. In May 1988, the university was renamed Southeast University. And in April 2000, Nanjing Railway Medical College, Nanjing College of Communications and Nanjing Geological School were merged into the university, whose main campus is located at the center of 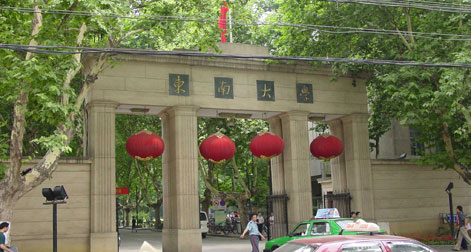 the ancient capital city of Nanjing, a sacred place for education since the Ming Dynasty. At present, Southeast University has five campuses, covering a total area of 155 hectares, with a built-up area of 886000 square meters.

Now, Southeast University has become a comprehensive university of high reputation comprised of various departments of science, engineering, art, social sciences, law, economics, management, languages, etc., with engineering as its focus. The university boasts over 40 schools or departments with 60 undergraduate disciplines in all. It also has 15 post-doctoral stations, and offers 105 PhD programs and 200 Master programs; it holds a national lead in architecture, civil engineering, electronics, information technology, energy, power engineering, and transportation technology. The total number of faculty and staff is 6000, including 1500 full or associate professors, 300 doctoral supervisors, 7 academicians of the Chinese Academy of Sciences and Academy of Engineering. The university, which has 15 "Changjiang Scholar" professorships, can engage 30 scholars as "Changjiang Scholar" Professors, and now 20 have been engaged. At present, the full-time students number over 26000, of whom about 9000 are postgraduates.

Southeast University encourages the school spirit of "rigor, truthfulness, unity and diligence", i.e., adopting the rigorous, truthful, realistic scientific attitude and working spirit of full cooperation. It has turned out more than 200000 excellent personnel, among whom there are 153 academicians. With the quality education strengthened, its graduates not only have excellent theoretical competence and practical skills, but also possess a wide range of knowledge and abilities. Its average undergraduate employment rate goes beyond 99% upon graduation.

Southeast University is one of the top 10 universities in scientific research and development in China. It has over 20 national or provincial research institutes, with a number of key research bases. Its research fund exceeded RMB 535 million in 2004. the SEU Architecture Design and Research Institute, which is one of the few national first-class design institutes, have undertaken various major projects. SEU's affiliated Zhongda Hospital, which was set up in 1935, is one of the first hospitals in Jiangsu Province that were assessed as "Class A Grade 3" hospitals by the State Ministry of Public Health.

International cooperation & exchanges play an important role in the development of Southeast University. Since 1978, more than 4000 teachers or researchers have been sent abroad for academic activities or exchanges, and over 3500 foreign experts and teachers have been invited to our university for lecturing, cooperative research or academic exchanges, among whom some are honorary professors of our university, including Y.H. Ku, Chen Ning Yang , Chien-Shiung Wu, Samuel C. C. Ting , Jean-Marie Lehn, T.Y. Lin, and so on. More than1400 international students from 60 countries have studied in this university, and over 1300 of them have completed their study and returned to their own countries. The university has also hosted 84 international conferences in all.

The university takes an active part in setting up international cooperative programs with other countries. Up to now, it has signed agreements for friendly cooperation with more than 100 universities, research institutes or corporations in countries including Australia, Britain, Canada, France, Germany, Italy, Japan, Korea, Singapore, Switzerland, Sweden, United States etc., which has contributed a great deal to the actual strength, international fame and development of the university.

Southeast University was traditionally at the head of the universities in Southeast China. Now, all its faculty and staff members are making concerted efforts to build it into a world-class university through integration, innovation, unity and diligence.