Xiamen University, www.xmu.edu.cn, was founded in 1921 by Tan Kah Kee, the well-known patriotic overseas Chinese leader. It was the first university in China founded by an overseas Chinese. At present it is the only key comprehensive university directly affiliated with the Education Ministry in any of the five special economic zones and is one of China 's higher-level universities designated for the state key construction of the "211 Project" and the "985 Project".

Over the past eighty four years, as the result of painstaking efforts by several generations of faculty and graduates inspired by the school motto: Pursue Excellence, Strive for Perfection, Xiamen University has accumulated rich experience in offering its educational programs. The university presents its features as a university "in the Special Economic Zone on the coast near Taiwan and with close ties with overseas Chinese." Following its fine tradition of "loving the motherland and the university", it has enjoyed a fine reputation both at home and abroad. Since its founding 84 years ago, over 1,40,000 students have graduated from the university, and over 50 academicians of the Chinese Academy of Sciences (CAS) and the Chinese Academy of 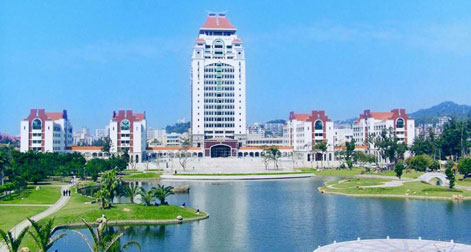 Xiamen University is now making great strides towards its goal of building a high-level university well-known both at home and abroad.